It has been a year since EE Times produced a version16.1 of the Silicon 60. Over that time while the global economic situation can — at best — be said to have stabilized the semiconductor and electronics industries are on the edge of "great expectations." 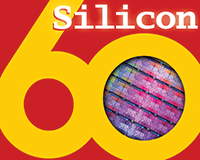 There seems no doubt that the Internet of Things will have a revolutionary impact on how people can live their lives, but exactly how that will manifest itself in terms of components, software, platforms, legal and business models, is not yet clear nor is the next big thing.

Drones for everything from window cleaning to delivering parcels and autonomous driving are examples of what could be about to impact us. Sales revenue of associated components and software will be enormous — but not this year. The result being a semiconductor market that is expected to decline in 2016 as it did in 2015. That is unprecedented in the absence of a general economic catastrophe — the global chip market did fall in 2008 and 2009 according to WSTS, but for obvious reasons.

Entrepreneurs are not daunted by the comings and goings of economic indices or industry consolidation but are greatly excited by the opportunities afforded by turning points in technology. So as usual there is no shortage of startup companies coming through to be considered for admission to the Silicon 60.

We can even discern a tentative return of venture capital to hardware startups. However, it should be noted that with the fast pace of system-level change we are experiencing is forcing more startups to pivot at some point to try and intersect with a viable market.

EE Times has selected 25 startup companies to come on to version 17.1 of its list of 60 firms that we feel are worth keeping an eye on. Some are more mature than others and may be lucky enough to start seeing the market coming towards them.

To make way for the newcomers, 25 companies have dropped off the list. Some of those were acquired including: Cambridge CMOS Sensors, MagnaCom and Soft Kinetic. Others have simply become mature with the passage of time. Those more mature companies, while no longer listed on the Silicon 60, may yet fulfil an investors' dream of moving to public ownership or going through a high-priced company sale.

The selection of the 60 companies in Silicon 60 v17.1 is based on the consideration of a mix of criteria including: technology, intended market, financial position and investment profile, maturity and executive leadership. They are emerging companies to follow — for a variety of reasons. The names of the companies brought on to the Silicon 60 at this iteration are highlighted in red in the listing below.

Brite Semiconductor (Shanghai) Corp. (Shanghai, China) was founded in 2008 and is located at Zhangjiang Hi-tech Park. It is an SoC and ASIC design company that pulls together intellectual property, foundry, test and packaging technologies to create custom silicon for its customers. Brite is backed by local foundry Semiconductor Manufacturing International Corp. www.britesemi.com